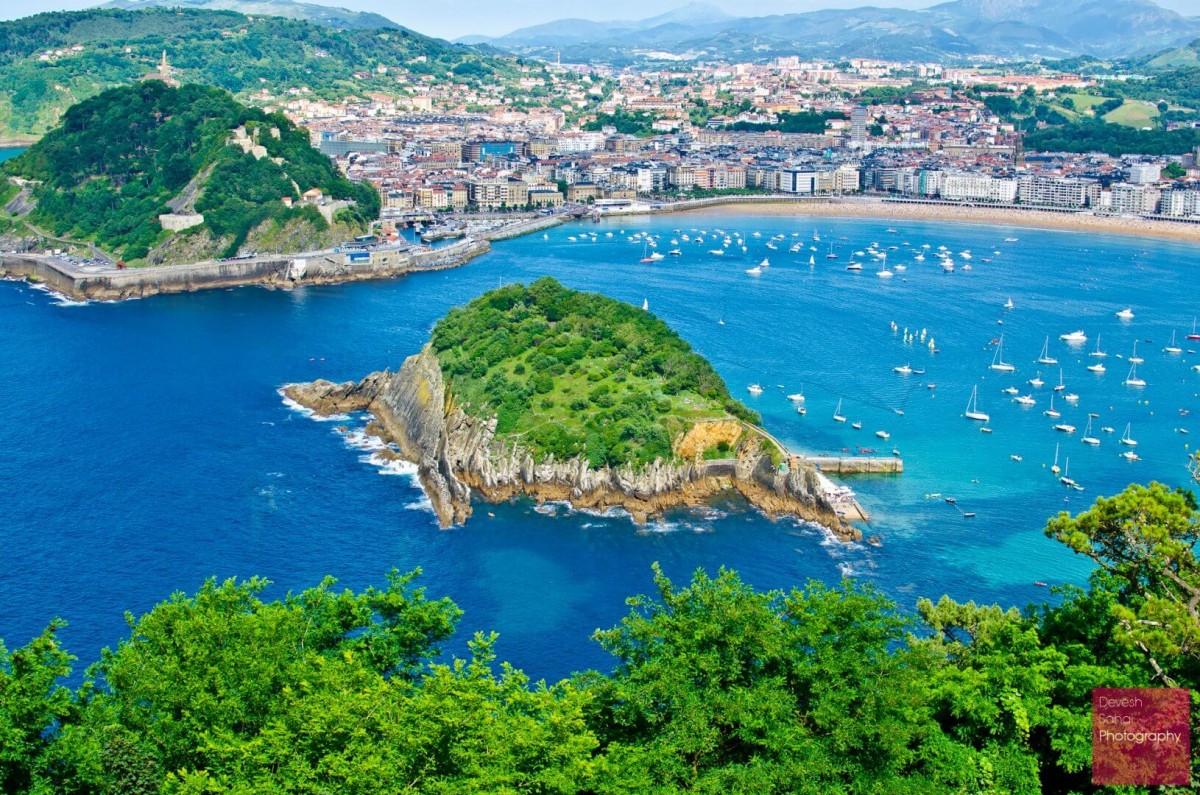 Have you ever dreamt of a sophisticated getaway in a vibrant city, where effervescent culture meets exquisite cuisine? San Sebastián – officially named Donostia (in Basque) – is your dream come true. This coastal metropolis is situated in the Basque region (north-west of Spain), close to the French borders and the Pyrenees. Known for its cobblestoned old town (Parte Vieja), bay-front, cast-iron promenade (Paseo de la Concha), rich culture, Michelin-starred restaurants, and famous La Perla Spa, San Sebastián is your go-to chic getaway!

“Exceptional” is the most accurate word to describe San Sebastian’s epicurean scene. Home to more Michelin-starred restaurants per capita than anywhere else in Europe –  with two of its restaurants receiving the prestigious three Michelin stars (Akelarre and Arzak) –  San Sebastián’s cuisine is worth a special journey.  Composed of a vast array of fresh seafood, jamón Iberico (Spanish ham), cider, and pintxos (Basque cousins of tapas), San Sebastián’s food is accessible to all and encourages social gatherings. Varying between €1 to €3 per piece, pintxos (Spanish for spike/skewer) were invented in San Sebastián. Usually served in bars, they differ from tapas mainly because they are presented with a skewer or toothpick, often on a slice of bread. They are enjoyed amongst friends, with a small glass of local Basque cider or wine. This is a selection of the tastiest pintxos bars in San Sebastián: Gandarias, Zeruko, Bar Txepetxa, and La Cepa.

Spoken around the West Pyrenees, Basque is the oldest language in Europe and its origins remain unknown. It is spoken by 40% of San Sebastián’s population. And since culture is also shaped by language, San Sebastián lively culture reflects this fact. Designated European Capital of Culture for 2016, the city cultural scene is composed of, among other things, Belle-Époque architecture, Gothic and Baroque Churches, festivals, concerts, museums, and an aquarium. Paseo de La Concha (The Concha Promenade) is without any doubt the city’s most iconic feature, with its white cast-iron Belle-Époque fence. Running along the seaside bordering La Concha Bay on the Atlantic coast, the promenade could be enjoying by foot or on bicycle, passing by iconic buildings, such as Hotel de Londres y de Inglaterra, Palacio de Miramar (Queen Marie-Christine’s summer residence), and La Perla Spa. With its high and low ties, and spectacular sunset, La Concha beach is also a great place to hang out along the promenade. Public and free, one can walk, sit, and swim there, including in winter.

One of the most beautiful thalassotherapy spas in the world, La Perla was part of Queen Marie-Christine of Spain summer residence. Located on the Concha Bay and established in 1912, the Belle-Époque architecture spa is not only dreamy but also affordable and quite beautiful as it offers a panoramic view of the ocean. It includes a series of seawater pools that massage with powerful jets of water set at different heights to target key muscles. The spa also includes an underwater gym, a direct access to the beach, saunas and steam rooms, and various massage and wellness services. A spa day at La Perla is a great way to end your classy getaway in the city of pintxos and culture.